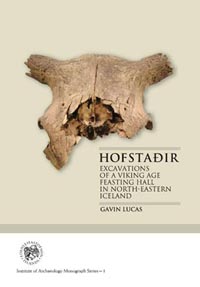 Bloody Slaughter: Ritual Decapitation and Display At the Viking Settlement of Hofstaðir, Iceland

By Gavin Lucas and Thomas McGovern

Abstract: This article attempts an interpretation of an unusual assemblage of cattle skulls recovered from recent excavations at the Viking Age monumental hall of Hofstaðir in Iceland. Osteological analysis of the skulls indicates ritual decapitation and display of cattle heads, and this article seeks to explore the meanings of this practice in relation to the context of the site and the wider historical and ethnographic literature. It is argued that the beheading of cattle and display of their heads was a part of sacrificial acts conducted on a seasonal basis at the site, and primarily in the context of feasting and socio-political gatherings. The gatherings acted simultaneously as a means of both dissipating social tension and enhancing political status.

Introduction: Recent excavations at the tenth-century Viking settlement of Hofstaðir in northeastern Iceland have recovered a minimum of 23 individual cattle skulls which display a range of unusual contextual, taphonomic and butchery characteristics. The site itself is also highly unusual because of the size of its main hall and the place name, which together might indicate it was a pagan cult-site. The conjunction of these features forms the subject of this article, which considers the problem of how to interpret the site and, in particular, the assemblage of skulls associated with it. It will be argued that seasonal acts of ritual slaughter occurred which were entwined with social gatherings in the context of feasting; moreover, the highly bloody nature of the slaughter will be emphasized as a key element to understanding the specific link to the socio-political nature of the gathering, underlining its broader importance rather than a narrowly religious interpretation.

The site Hofstaðir is famous in the literature of Viking pagan beliefs for being one of the most enduring examples of a pagan temple. It was first excavated by Daniel Brunn in 1908, whereupon a the temple interpretation was put forward and for the most of the early twentieth century this interpretation remained. The basis for this interpretation as a temple site was both the place name (hof meaning temple) and the size of the hall (38 m long, more than twice the size of most ordinary halls). In addition, a separate room at the north end of the hall was interpreted as a shrine or inner sanctuary. From the mid-twentieth century, however, doubts were expressed about this interpretation because, although large, the site was little different in form to other farmsteads. Nonetheless, its size was significant, as was a supposed huge cooking-put located south of the hall, which was re-excavated by Olaf Olsen in 1965. In Olsen’s major work on Viking pagan site, Horg, hov og kirke he redefines Hofstaðir as a temple-farm, that is a farm of a chieftain who also acted as priest, presiding over religious ceremonies.

See also the Facebook Page for the Hofstaðir Excavations