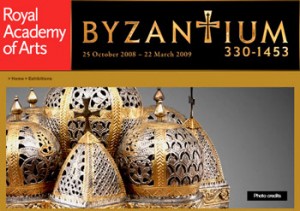 Highlighting the splendours of the Byzantine Empire, Byzantium 330–1453 comprises around 300 objects including icons, detached wall paintings, micro-mosaics, ivories, enamels plus gold and silver metalwork. Some of the works have never been displayed in public before.

The exhibition includes great works from the San Marco Treasury in Venice and rare items from collections across Europe, the USA, Russia, Ukraine and Egypt. The exhibition begins with the foundation of Constantinople in 330 AD by the Roman Emperor Constantine the Great and concludes with the capture of the city by the Ottoman forces of Mehmed II in 1453. This is the first major exhibition on Byzantine Art in the United Kingdom for 50 years.
This epic exhibition has been made possible through a collaboration between the Royal Academy of Arts and the Benaki Museum, Athens.