A Viking feasting hall measuring almost 50 metres in length has been identified near Vadstena in Sweden. Archaeologists from Stockholm University and Umeå University used ground-penetrating radar, a non-invasive geophysical method, to locate and map the house foundation.

The Aska barrow, where the hall has been found, was long seen as a burial mound. But archaeologists have now revealed that it is a foundation platform for a large building, most likely dating from the Viking Period. The hall was probably the home of a royal family whose rich graves have previously been excavated nearby.

“Parallels are known from several of the era’s elite sites, such as Fornsigtuna near Stockholm and Lejre near Roskilde. The closest similarities are however seen in a recently excavated feasting hall at Old Uppsala near Stockholm. Such close correspondences suggest intensive communication between the two sites”, says Martin Rundkvist of Umeå University

The building was about 14 metres wide and was equipped with double walls and four entrances. The measurements also indicate a large fireplace at the centre of the floor.

“Our investigation demonstrates that non-invasive geophysical measurements can be powerful tools for studying similar building foundations elsewhere. They even allow scholars to estimate the date of a building without any expensive excavations”, says Andreas Viberg of the Archaeological Research Laboratory at Stockholm University who directed the fieldwork. 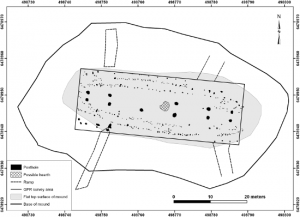 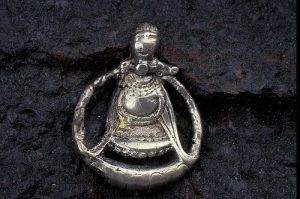