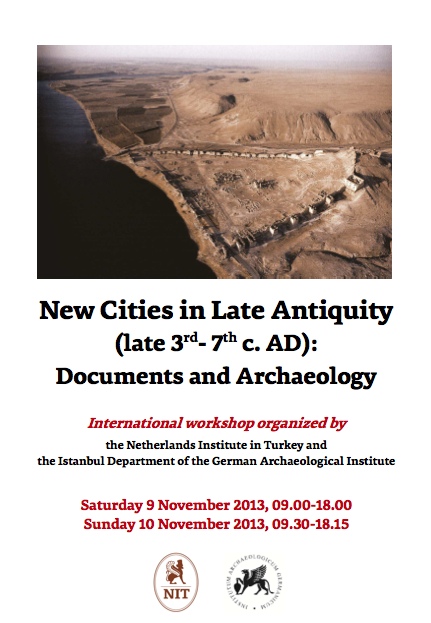 The Netherlands Institute in Turkey and the Istanbul Department of the German Archaeological Institute are pleased to announce the organization of a workshop on the archaeology of newly founded cities and settlements of the late-antique period, which will take place in Istanbul on 9-10 November 2013.

The beginning of Late Antiquity was marked by the foundation of the new city of Constantinople, while the cultural and social changes of this era were intertwined with the story of the transformation of the Graeco-Roman city. The perception of urban change in in Late Antiquity as decline, championed for decades by classically trained archaeologists and historians, is now challenged not only by the more systematic study of late-antique phases in pre-existing Greco-Roman centres, but also by the impressive remains of significantly prosperous new late-antique settlements which attest to a more complex and dynamic situation in the urban and rural space than once assumed. A series of newly-founded, re-founded or relocated cities exemplifies new realities and ideals in urbanism. As their development took place on sites without the monumental background of a pre-existing urban environment, these cities allow insights through the understanding of urbanism by the imperial government, and through local realities and needs in the provinces. Late Antiquity made its own contribution to the network of urban centres under the influence of a series of factors including imperial administration, military needs, economic and demographic growth and the rise of new networks of commerce and pilgrimage.

Several years of excavation and study have accumulated evidence on sites that were built as cities during Late Antiquity – famously Caričin Grad-Justiniana Prima, Dara- Anastasiopolis, Resafa-Sergiopolis and Zenobia. The meeting announced here aspires to produce an overview of the state of research and a theoretical discussion on the motives and patterns of city building and settlement development in Late Antiquity.

This workshop is organized in association with the research project “The Foundation of New Cities in Late Antiquity”, conducted by Efthymios Rizos at the Netherlands Institute in Turkey and Koç University Istanbul with the support of the Scientific and Technological Research Council of Turkey (TÜBITAK).