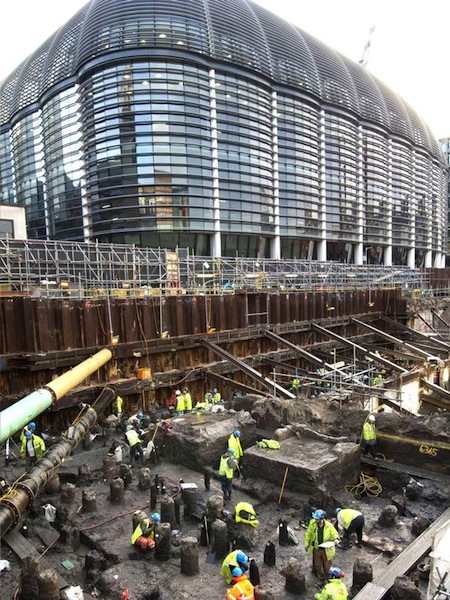 When archaeologists were called to a site in the City of London where an ugly office block and a bar once stood, they were sceptical that it held any secrets.

Yet six months into the dig on Bloomberg Place, a three-acre site close to Mansion House tube station, experts believed they have stumbled across the most important find of Roman London artefacts in recent memory and have dubbed it the “Pompeii of the north”.

Sophie Jackson, from the Museum of London Archaeology (Mola), is managing the site. She said: “We have a huge amount of stuff from the first four hundred years of London. It will tell us so much about the people of London. We will get names and addresses, things we’ve never had before. It’s really exciting.”

Archaeologists have so far discovered 8,000 objects and expect that to rise to 10,000 by the time the project is finished. These include writing tablets, clothing, jewellery and pottery as well as parts of buildings that will help build a picture of thriving London life from around 40 AD to the fifth century.

Ms Jackson said: “Why the site is so incredibly important is the preservation of archaeological finds which are normally decayed, or lost or destroyed on other sites.” The reason many of the objects are so well preserved is that one of London’s lost rivers, the Walbrook River, ran under the site, with the damp conditions preserving the objects.

Michael Marshall, Roman find specialist at Mola, said the findings would “completely transform” understanding of Roman London. “There are very few civilian sites. This is the largest assemblage discovered in London.”

Bloomberg is building its new headquarters on the site and in late 2010 started demolition of Bucklersbury House, build in 1952.

It was that original development – which made the discovery of the Temple of Mithras on the site – that had led the archaeologists to believe there would be little of historical value left.

Ms Jackson said: “We thought that construction had removed all the archaeology on the site. We thought: ‘What a shame, it’s all gone.’ Then we found that around the edges, archaeology survives.”

Yet, the newly uncovered treasures include 250 leather shoes, writing tablets that may give clues to names and addresses of Roman Londoners, as well as several items never seen before.

This included a stitched leather furnishing never before seen in Roman discoveries and an amber amulet in the shape of a gladiator’s head.

Over 150 fragments of writing tablets have been discovered in one room – in what was described as similar to finding an abandoned filing cabinet – with information written on or scratched into them about people who lived in London at the time.

Archaeologists expect to double the number of names known in London to over 30, although nothing is certain. Mr Marshall said: “It’s an amazing accident when the text survives.”

Ms Jackson added: ““These are really exciting; there are only 14 references to London in all of Roman literature.”

The objects ended up in the ground generally from two ways, people throwing objects into refuse pits, or throwing them into the river as offerings.

The wetness of the ground proved particularly fortuitous, helping preserve the organic remains, and Mr Marshall called it the “best site in London” for Roman remains.

“No oxygen could get at the organics, so wood, leather, horn, and occasionally textiles survive in these conditions. The rest of the city of London doesn’t get that water logging. It gives us a picture of what it would have been all over the whole city.”

The Temple of Mithras, which was dismantled and moved down the road in 1954, will also return as part of the building works. It will be restored to the original site with a viewing area built into the new Bloomberg headquarters.